The 200th anniversary of George Washington’s birth in 1932 sparked an outpouring of images and information about the nation’s first president. This print was one of twenty commissioned by a group of investors that celebrated different events and scenes from Washington’s public and domestic life. Consumers purchased the etchings, in portfolios of 20 images, each signed by the artist. 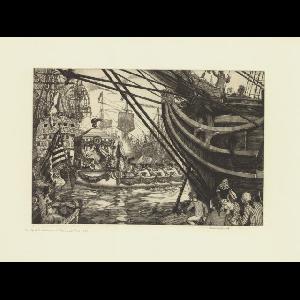