A Master Mason certificate issued by the Grand Lodge of New Hampshire and Blazing Lodge, No. 11, to Horace Chase. Dated November 14, 1815. The certificate is decorated with the Eye of Providence and is bordered by two columns. Atop each column is stationed a woman: The first woman, Hope, holds an anchor, and the second woman, Faith, holds a book and cross. At the bottom of the certificate, a third woman, Charity, is seen tending to three children. She is flanked on each side by two aproned Masons in Colonial dress.

Signed and Sealed: Masonic Certificates, corridor, part one, 2017 Master Mason Certificate, 1815 Issued to Horace Chase (1788-1875), Blazing Star Lodge No. 11, Concord, New Hampshire Designed and engraved by Alexander Anderson (1775-1870), New York, New York Gift of the Supreme Council, Northern Masonic Jurisdiction, A78/032/001 Horace Chase, a lawyer, judge, politician and postmaster, received this certificate at the beginning of his Masonic career. He later went on to become the Grand Master and Grand Secretary of the Grand Lodge of New Hampshire. A certificate acted as a credential for a Freemason who traveled beyond his circle of acquaintance. The text on this certificate highlights this function noting that Chase and lodge officers signed it, “to identify our said brother and prevent deception.” 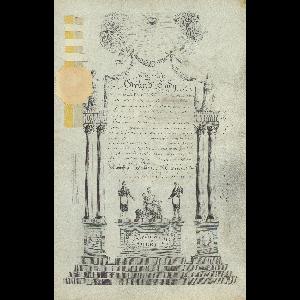