A Royal Arch certificate issued by Mount Horeb Chapter (Lowell, Massachusetts) to Addison Putnam and dated April 30, 1855. Imprint at the bottom of the certificate reads, "Drawn by J.R. Penniman. Engraved by Annin & Smith." The text block is bordered by columns on the left and the right. Above the certificate is a presentation of three seated persons on thrones over which is a canopy. In front of the thrones are Masonic tools. The English and Latin are devided by an arch supported by two columns. Between the columns are two persons seated on an elevated oblong structure flooded by rays of light. Along the left edge of the certificate is attached a red ribbon to which is attached a seal with 'Mount Horeb R A Chapter Lowell Mass' on it. 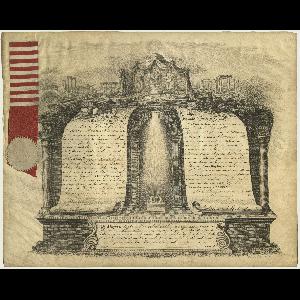