The entrepreneurial Paul Revere (1734-1818) provided copper fastenings, like this spike, for the construction of the USS Constitution from 1794 to 1797. Revere’s business records note he billed the government over $3,800 for these materials. Over the years, the USS Constitution has been refurbished and rebuilt many times, so it is possible that spikes originally made in Revere’s facility became available to the public when they had outlived their usefulness. 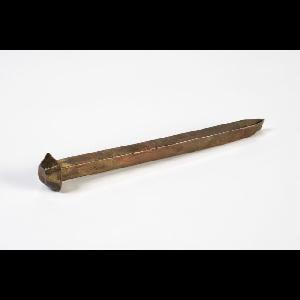