The Bloody Massacre hand-colored engraving; squad of British soldiers firing on unarmed civilians in an open square surrounded by buildings; in background is the "Old State House" with the time on the clock reading 10:20; inscribed at the top is "The Bloody Massacre perpetrated in King Street Boston on March 5, 1770 by a party of the 29th Regt."; at bottom reads "Engrav'd Printed & Sold by Paul Revere Boston./ Unhappy Boston! See thy Sons deplore,/ thy unhallow'd Walks besmear'd with guiltless Gore..."

One of Revere's best known engravings was the widely circulated propagandized depiction of the Boston Massacre in which five citizens were shot after heckling British soldiers. Revere's version had a different title and labeled the British Customs House "Butcher's Hall." At the bottom of the print was a satiric verse composed by Dr. Benjamin Chuirch, a member of the Committee of Safety who was later uncovered as a traitor. Revere's image was appropriated from another engraver, Henry Pelham, who castigated Revere for printing and distributing his image. Copying another's work was not unusual prior to the establishment of copyright. Revere relied on various sources, predominantly English prints, for the images in his engravings. 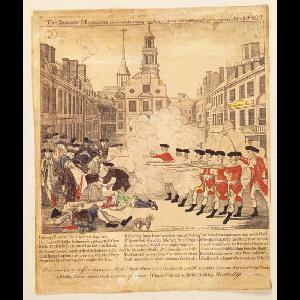 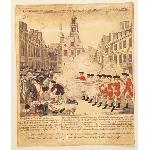 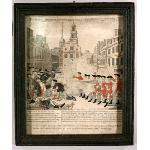