Tall case clock. a: Front corners of bonnet each have a column with brass fittings and bases. b-c: weights d: movement, brass face with Roman numerals and numbers. There is a second hand above the hour and minute hands. In the center of the second clock is "No. 228." At the sides of the hands and below, it reads, "Benjan. H. Willard / Roxbury / fecit." At top is a painted ship that "sails" against a painted backdrop of additional sails. e: pendulum f: body, plaque on the front reads, "This clock was owned by / General Joseph Warren / when he was killed at the battle of / Bunker Hill - - - June 17th 1775 / and was purchased by / Joseph Warren Lodge F. & A.M. / Aug. 29th 1873." Around rim enclosing the paper ship is an inscription: "Ut Hora Sic Vita Transit" g-h: winders i-j: keys

This clock has a history of once belonging to Revolutionary War hero, Joseph Warren (1741-1775). Members of Joseph Warren Lodge purchased it in 1873. Although no documents support the Warren history of ownership, lodge members cherished the clock and displayed it with pride. Like the Willard clock on view nearby, this one bears a somber Latin motto. The motto is engraved along the top edge of the maritime scene on the face. It says, “Ut Hora Sic Vita Transit,” or “Life Flies as the Hour Passes.” For further information, see Newell, Aimee, et.al., "Curiosities of the Craft: Treasures from the Grand Lodge of Massachusetts Collection", 2013, p. 220-221. 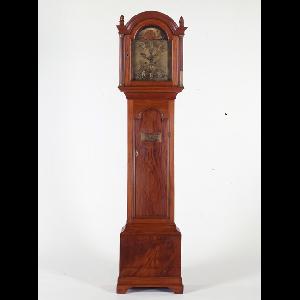 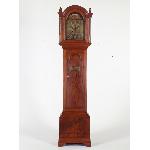 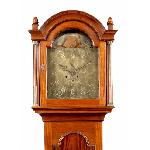 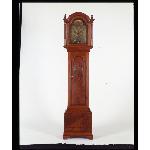 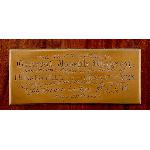