Engraving; allegorical image showing Father Time, leaning on a globe and giving a running commentary of all the recent momentous events, while projecting a magic lantern view of Indians and American patriots with the stars and stripes pursuing retreating British troops; two British soldiers struggle under a yoke placed about their necks; in the center, flames under a teapot are being fanned by a bellows operated by the French cockerel, as the teapot explodes it gives off lightning bolts, a rattlesnake, and a Liberty cap on a pole; "Stamped" paper documents feed the flames and help bring the tea pot to a boiling point; scene is viewed by four allegorical females representing Britannia [holding a shield bearing a white horse, the Arms of the House of Hanover], America [Indian Princess], Africa [a black woman], Asia [oriental turban]; Indian warrior also looks on while seated on a bale of trade goods marked with the engraver's initials "CG."; title appears in the lower margin in three languages: English, German and French; in the center of the lower margin are two vignettes of scenes that compare the American Revolution to (1) Holland's auto da fe (1560) and, (2) Switzerland's William Tell (1296); image is dated "1778" at lower right; printed on bottom: "The Tea Tax-Tempest or The Anglo American Revolution." 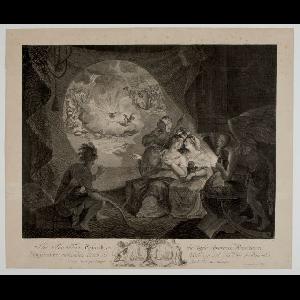 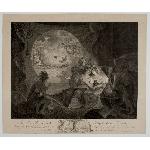 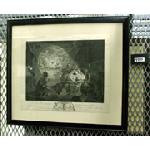