Though the original engraving was made in the 1780s, this particular certificate was not sigined by the Masonic member until 1796, after Benjamin Hurd's death; the images include two large columns on either side and two cherubim with Masonic aprons at the bottom of the certificate, also include a coffin and many Masonic tools. 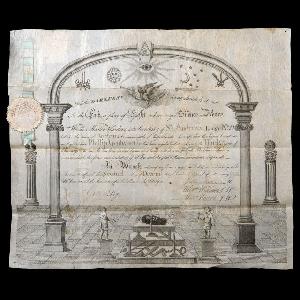