Masonic Royal Arch apron with square body and rounded flap. Off-white with red silk binding. Flap is painted with light blue clouds and an all-seeing eye in the center. Black lettering around the eye reads "Sit Lux et Lux Fuit." The body is painted with an arrangement of Masonic symbols. In the center is a series of three columns with archways on a mosaic pavement. Two figures in blue robes stand on top of the archway and lower a third naked figure toward the pavement. In the center of the archway columns is an altar with book and square and compasses. A pair of blue columns flanks the archways. Both have a pink banner wrapped around. One banner reads "Love" and "Strength." The other reads "Wisdom" and "Beauty." To the left of the outer column is a burning bush. To the right of the outer column is a seven-armed candelabra. A figure in a pink robe stands on top of each outer column. One wears a hat and holds an incense burner. The other stands on a globe and holds up a five-point star. Between the two outer columns are Masonic symbols: sun, moon, seven stars, crossed sword and scales of justice, crossed compasses, level and folding straightedge, hand holding sword and hand holding plumb. Lined with off-white linen. There are a few rough pencil sketches of additional symbols that were not painted.

This apron, although unsigned—like the vast majority of surviving Masonic aprons from the late 1700s and early 1800s—has been attributed to Nicholas Hasselkuse. He ornamented this apron with colorful symbols, figures and mottos. This and the other aprons attributed to Hasselkuse display iconography associated with the Royal Arch degrees. Hasselkuse lived in Herkimer County, New York, where Masons founded a lodge in 1794. Masons in the area had an interest in the Royal Arch degrees and established a Royal Arch chapter there sometime before 1810. “The Badge of a Freemason: Masonic Aprons from the Collection,” March 2016-March 2017 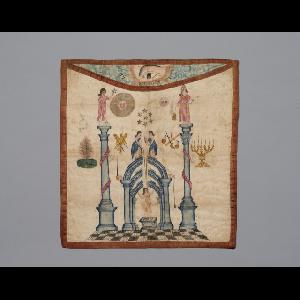