Rectangular foundation stone with marks made by the stonemason.

This stone, removed from the White House's foundation during a post-World War II renovation, bears a stonemason's mark in the upper right corner. The U.S. Government contracted Scottish stonemasons to come to America to build the executive mansion. Workers completed the mansion in 1800, only to see it burned during the War of 1812. In 1952, President (and Mason) Harry S. Truman sent this stone, along with an accompanying letter (GL2004.0147), to the Grand Lodge of Massachusetts. For further information, see Newell, Aimee, et.al., "Curiosities of the Craft: Treasures from the Grand Lodge of Massachusetts Collection", 2013, p.68; and blog post, February 18, 2010 http://nationalheritagemuseum.typepad.com/library_and_archives/2010/02/at-the-end-of-world-war-ii-president-harry-s-truman-1884-1972-became-aware-that-the-white-house-needed-extensive-repairs.html 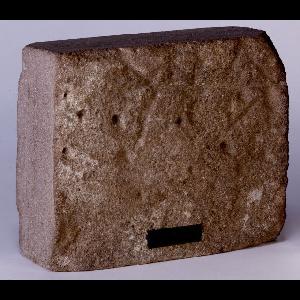 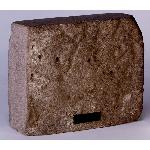