Oval pendant on white ground (likely ivory). Masonic symbols are painted on and cut from paper and applied to ground. Some gold paper was used. Symbols include the all-seeing eye, columns with globes atop, trowel, and others. The all-seeing eye is at top center surrounded by clouds. In the center of the middle section of the pendant is a pair of columns with globes on top. Between the columns are seven stars, a wreath or other symbol, and an open book with a square and compass overlaid. Along the outside of the left column are a trowel, three candles, and a plumb. Along the outside of the right column are a triangle, a maul, and a level. The bottom section of the pendant is blue with steps leading to the center of the columns and a coffin with skull and crossbones drawn on it. The pendant is applied to a piece of cardboard. Below, an inscription is handwritten in ink: "Presented to the / G.L. of Mass. by / Gen. Sam'l C. Lawrence, / who purchased it / at the sale of the late John Haigh's Library. / Oct. 29, 1901."

Samuel Crocker Lawrence (1832-1911) purchased this pendant at the 1901 auction of industrialist and Mason John Haigh's (1832-1896) collection. Lawrence subsequently presented it to the Grand Lodge Museum. It was likely made by a French prisoner of war while he was held captive in England during the Napoleonic Wars. The center of this medallion or jewel is similar in form and materials to others fashioned by French prisoners in England during the Napoleonic Wars as an early form of trench art (decorative items made from found and available materials by soldiers). Between 1793 and 1814 there were over 120,000 French soldiers and sailors in British prisons. Using what was handy – animal bones, straw from their mattresses, paper, and their own hair, among other materials – many of the prisoners created small pictures to sell or trade for food, clothing or bedding. 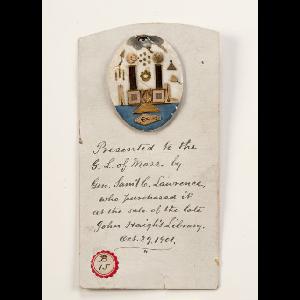