Needlework sampler stitched over one and two threads on 24-count unbleached fabric. All edges are turned under and hemstitched. The outer border is a floral vine at top and sides. Green chain-stitch vine with green satin stitch leaves and satin stitch flowers in pink, peach, yellow, purple and blue. Along the bottom is green satin stitch grass with a white sheep at left with a yellow and dark brown bird. There is a man and woman in the center. The woman wears a striped dress (Empire waist) and a yellow hat. The man has a brown coat, black top hat and cream breeches. At right is a black and white dog with an orange and brown bird. The inner border is green cross-stitch at top, green long-arm cross stitch at sides and light blue satin stitch at the bottom. The first five rows are an upper-case cross-stitch alphabet with A through Z including multiple versions of most letters. At the end are two ampersands with diamond motifs and initials "P R." There are dividing rows in between including a cream satin stitch sawtooth, an orange cross-stitch sawtooth, an orange herringbone, a yellow herringbone and green cross-stitch. The next band is cross-stitched flowers in rust, yellow, blue and brown with green leaves. Part of the background is filled in with cream. The next row has a lower-case alphabet (a-z) cross-stitched over one thread. The letters are followed by numbers one through eight; letters and numbers are in purple. Next is a row of green and white satin stitch sawtooth. The next row is cross-stitched fruit or flower plants in green, rust and peach. Cross-stitched triangles, striped in three shades of green are between the plants. The plant at far left has one satin stitch fruit (perhaps a later repair?). This row is followed by a row of brown cross-stitch and two rows of orange cross-stitch. The bottom two rows are the cross-stitched signature reading "Patty Richardson Aged 12 Bo / rn in February the 9 year 1787." The letters of the signature are in green, peach, brown, blue, white and yellow. There is a row of blue chevron stitch in between the two rows of signature and a row of orange herringbone stitch at the bottom. 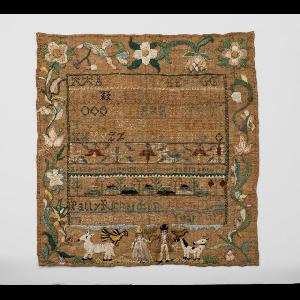 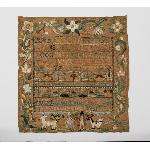 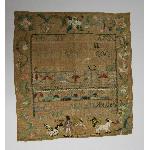