On January 9, 1800, three weeks after George Washington's death, citizens of Boston gathered to express their grief and loss with a procession through the streets. The Grand Lodge of Massachusetts planned its own procession a few weeks later, on February 11, 1800. Apron owners often noted their names under the flap on the front of their apron. With its black lace trim and inked motto, "Memento Mori" (Latin for "Remember Death"), this apron was likely crafted for use at a funeral or solemn procession. It may have been worn by a brother of sea captain and Freemason William O’Brian (1753-1784) of Marblehead, Massachusetts, to commemorate his death. Jeremiah O’Brian (1740-1818), William’s brother, is recorded as having attended a procession to honor the passing of George Washington (1732-1799). He may have donned this apron at the event. “The Badge of a Freemason: Masonic Aprons from the Collection,” March 2016-March 2017 For further information, Newell, Aimee, et.al., "Curiosities of the Craft: Treasures from the Grand Lodge of Massachusetts Collection", 2013, p. 234-235, AND Blog post, January 10, 2017, http://nationalheritagemuseum.typepad.com/library_and_archives/2017/01/the-north-shore-lace-industry.html 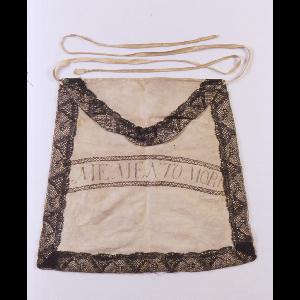