White creamware footed bowl with black transfer prints on sides and inside bottom. Images on the outside include a portrait of Benjamin Franklin wearing a fur hat. Banners on each side read "Benj. Franklin / L.L.D., F.R.S." Lettering below the portrait reads "Born at Boston in New England 17 Jan. 1706." Also on the side is an image of four allegorical figures in the ocean. One sits on a shell (Venus); a sea monster's tail is visible in the background. The next image on the outside is an eagle with stars and banner in its mouth, "E. Pluribus Unum." Fourth image on the outside shows three men and two seahorse creatures. One man stands on a shell on one of the creatures and holds a trident (Neptune). Another man blows into a conch shell. Printed inside the bottom of the bowl is a circle with three classical allegorical figures representing peace, liberty and plenty. Lettering above them reads "Deus Nobis Haec Otia Fecit." This central medallion is surrounded by thirteen interlocking rings, each with the name of one of the thirteen original states. Four images or "trophies" related to education and war are printed in black along the inside edge of the bowl. One shows a group of Masonic tools/symbols: square, hourglass, protractor, compasses, globe, etc. One shows seafaring tools: quadrant, trident, sail and others. Another image shows a banner with a drum and leafy sprigs. The fourth image shows a cornice with cannon, leafy sprigs and cannonballs. 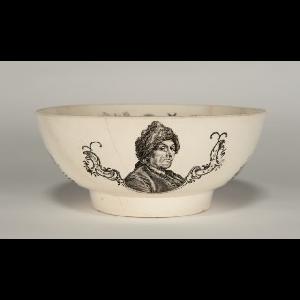 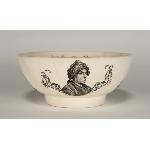 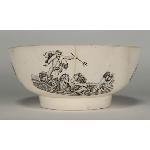 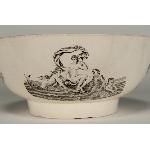 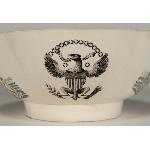 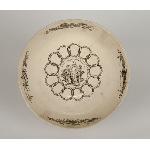 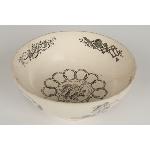 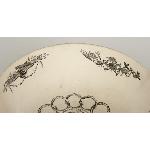