Shield-shaped Masonic mark medal of gilt copper surmounted by square and compasses imposed on an open Bible. The shield is engraved with an arch standing on a mosaic or checkered pavement. A blazing star (or pentalpha) is suspended from the keystone of the arch. Within the arch, three squares appear above the ark. There are Masonic symbols on each side of the arch, including crescent moon, beehive, Noah's ark, and an anchor. Below the pavement is the inscription, "Solomon Rathbun / Friendship M.M. / Lodge No. 39 / Milton." The other side shows the original owner's personal mark, a female figure with an anchor representing Hope, inside a circular border with the letters, "HTWSSTKS."

Part of the York Rite, a Masonic organization through which a Freemason may pursue additional degrees, mark medals were often made to order for men who received the Mark Master degree. The degree is named after the marks that stonemasons chiseled into the stones of buildings to identify their work. Like medieval stonemasons, Masonic Mark Masters create their own symbol, which they register in their chapter's Mark Book. This medal originally belonged to Solomon Rathbun [Rathbone], who was born in Richmond, MA in 1778. He married Lucy Allen Beebe, in Lansingburg, New York around 1806. Around 1813, they lived in Rock City [now Milton], New York, which is where Friendship Lodge was located. They moved west around 1817. By about 1824, the couple was living in Vincennes, Indiana. For further information, Hamilton, John D., "Material Culture of the American Freemasons," 1994, p. 143-144 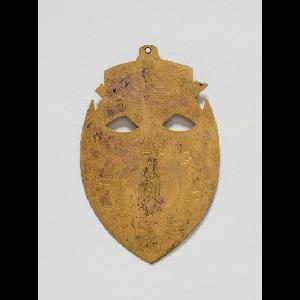 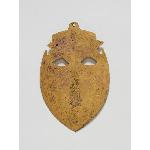 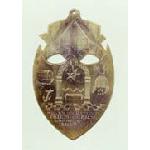