Gilded Royal Arch openwork engraved jewel with loop, top center. Overall, in the form of an arch flanked by columns, four steps form the base. On the front, the top center of the arch has a keystone with an all-seeing eye engraved on it, a pick and coffin are engraved on the steps. At the middle of the jewel is a circle containing a six-pointed star formed of two interlaced triangles. Text (in Latin) on the circle reads "Deo Regi Fratribus Honor Fidelitas Benevolentia." [For God, King and Brethren, honor, fidelity and benevolence] Engraved on the arms of the two triangles forming the star are the words "Concord Peace Truth” and “Wisdom Strength Beauty." At the center of the star is a triangle engraved with a compasses over a globe. At the top of the circle is a bow. A ladder with four rungs connects the bow to the arch. Below the circle is an oval decorated with leafy scrolls and crosshatching that bears an engraved letter "G". Beneath is a banner displaying a phrase in Latin: “Nil nisi clavis deest” [Nothing is wanting but the key]. On the back, text on the circle reads (in Latin)"Talia Si Jungere Possis Sit Tibi Scire Satis” [If thou canst comprehend these things, thou knowest enough] “AL 5810 AD 1810." The banner at the bottom is engraved, "Harmony Royal Arch Chapter." The arms of the two triangles forming the star are engraved, “We Have Found” and “Invenimus Cultor Dei Civis Mundi” [We have found the worship of God, O citizen of the world] and (in Greek letters) Eyphkamen. [We have found it] and “L. Keatting” [owner’s name]. The triangle at the center is in engraved with a circle with the mnemonic "HTWSSTKS" on it. Along the base of the jewel is engraved "H.H.R.A.C. - N. 52."

Founders first established Harmony Holy Royal Arch Chapter No. 52 in 1794. Initially the chapter worked under the authority of a warrant issued to Harmony Lodge No. 52 in Philadelphia. Lambert Keatting, who owned this jewel, belonged to Lodge No. 67 in Philadelphia. He was elected Master of the lodge in 1811 and 1812. Later, in 1820, he became a member of Lodge No. 2, also in Philadelphia. A boot and shoemaker, Keatting joined the Harmony Holy Royal Arch Chapter No. 52 in 1810. A few years later, in 1816 and 1817, he served as the presiding officer, or High Priest, of the chapter. For further information, see blog post: https://nationalheritagemuseum.typepad.com/library_and_archives/2020/06/an-elaborate-royal-arch-jewel-owned-by-lambert-keatting.html 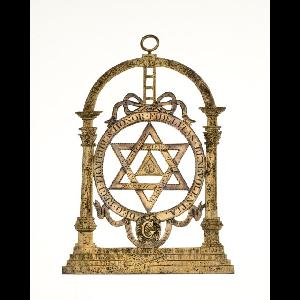 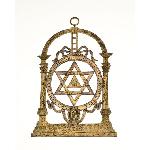 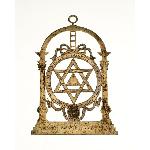