Off-white Masonic Master Mason apron with rounded body and flap. Faded pleated silk ribbon trim is applied along the edge of the flap and body. Painted decoration on the flap shows a blue sky with all-seeing eye and glory rays, flanked by yellow sun and yellow crescent moon in the center of seven stars. Body is painted with a yellow archway supported by two columns. At center of the arch is an oddly-shaped keystone - more like a scroll. Masonic tools are drawn at the bottom of the columns - square, level, plumb, compasses. Green leafy flowering vines extend up the outside of the columns. In between the columns is a pastoral scene (green grass with brown paths, birds and flowers). Three female figures stand in the scene, representing virtues (either faith, hope and charity, or wisdom, strength and beauty). One holds a spear and a shield, one sits with two children, and the third stands holding an unidentified object. In between the figures are arrangements of Masonic symbols including an hourglass, Noah's ark, a beehive, a scythe, a ladder, a coffin, an altar with Bible and three candlestands, crossed keys, trowel, sword and balance. In yellow above the center figure is a square and compasses symbol with G in the middle. Lined with pale peach glazed cotton.

Painted with a pastoral scene, in coloring and style this apron shares similarities with the kind of art taught to and practiced by schoolgirls. The painter who decorated this apron, possibly a female relation of its original owner, set various Masonic symbols, such as an altar, ark, beehive and hourglass, in a leafy and green rolling landscape. In delineating some of the allegorical figures on the apron, the artist may have looked to a certificate, like the one engraved by William Rollison (1762–1842) reproduced nearby, as a model. “The Badge of a Freemason: Masonic Aprons from the Collection,” March 2016-March 2017 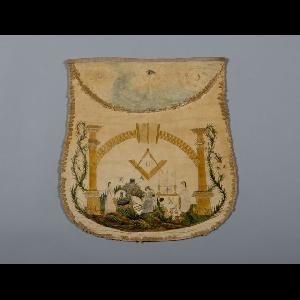