Framed tracing board painted with stencils on velvet. Velvet, two pieces sewn together, seam center. The paint (likely oil based) layer ranges from a thin wash to thick areas. Central image is a three-part temple with columns, flanked by two columns, set in a landscape of rolling hills. Masonic symbols in the landscape include an ark and dove at right and an all-seeing eye, flanked by cherubs/angels along with two comets, seven stars, a sun and a moon, at center. Symbols in the foreground include a rough and a finished ashlar, Masonic tools (including a mallet) and an altar with an open Bible and a square and compasses on top. The first floor of the building is held up by three columns in different styles (likely representing Ionic, Doric and Corinthian). Two figures wearing red coats populate the space. One is seated in a Windsor chair with book or board; the other, wearing an apron, faces to the right and holds a rod or a sword. Black and white tiles radiating from a central point and surrounded by a saw tooth border decorate the floor. A beribboned square, level and plumb adorn the columns. An anchor rests against the right hand column. On the second level of the building, held up by five different styles of columns, a figure wearing a collar, gestures, to the right are two openings topped with fan-shaped windows. On the third level of the building, supported by five or six columns, a figure wearing a red coat and Masonic apron raises his right hand. At his feet are Masonic tools including a trowel, hourglass, skull and cross bones. Low plinths flank the columns. A pot of burning incense is on top of one; on the other is a globe. A domed roof surmounts the top level. Around its edge are a hand holding a sword, a book (likely a Bible or a book of constitutions), a sword pointing to a naked heart and the forty-seventh problem of Euclid. A ladder directed toward the all-seeing eye is on top of the structure’s roof. Some decades after it was created, the tracing board was framed in a flat wooden frame. 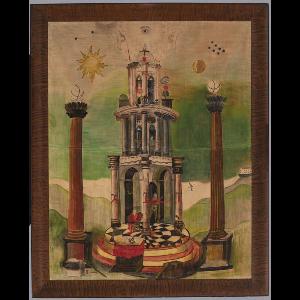