Fraternal Ancient Order of Foresters mug with pink luster accents. White body with handle at one side. Rim and base have a pink luster stripe. The handle has a pink luster stripe and the body shows pink luster squiggles all around. One side has a colored image of greenery with a central black and white shield. The shield is divided in quarters by a red cross and each quarter has a symbol (square, clasped hands, horn, etc.). At top center of the shield is a brown stag's head. A man stands at each side of the shield. Both wear black chapeau-de-bras-style hats with plumes, black coats and white boots and gloves. Each has a sword. One stands with a dog. Both have peach-colored legs, which give the appearance of bare legs, but details show they are wearing breeches. Above the shield is an all-seeing eye and black lettering, "Ancient Order of Foresters." The other side of the mug shows a green leafy wreath with red flowers at bottom center and sides. Black lettering in the middle reads, "Ensigns of state that feed our pride, / Distinctions troublesome and vain, / By Masons true are laid aside, / Arts free-born sons such toys disdain. / Ennobled by the name they bear, / Distinguished by the badge they wear." Inside the mug, attached to one side, is a green and yellow frog.

This mug was made in England in the 1830s or 1840s. Known as a "frog mug," the vessel has a ceramic frog inside that would surprise the drinker as he or she drained their beverage. The Ancient Order of Foresters dates back to 1790 in England, when it was known as the Royal Ancient Order of Foresters. According to the group, their object was "to unite the virtuous and good in all sects and denominations of man in the sacred bonds of brotherhood so that while wandering through the Forest of this World they may render mutual aid and assistance to each other." In 1834, the group had a schism and changed its name to the Ancient Order of Foresters. It also changed its ritual and introduced new signs and passwords. Although the Order came to the United States in 1832, it did not take strong hold until the 1860s. Today, the group remains active in England as the Foresters Friendly Society. Despite the prominent inclusion of the Foresters name on the mug, it bears a verse from a decidedly Masonic song: "Ensigns of state that feed our pride, Distinctions troublesome and vain, By Masons true are laid aside, Arts free-born sons such toys disdain. Ennobled by the name they bear, Distinguished by the badge they wear." This verse is part of "The Fellow-Craft's Song," which appeared in Anderson's Constitutions, a governing document for Freemasonry, when it was published in 1723. 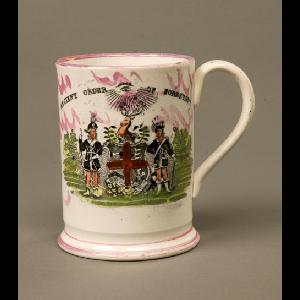 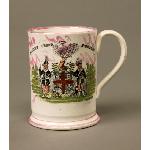 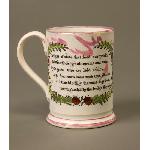 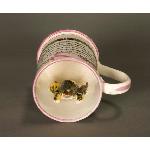