Masonic Master Mason apron with square body with rounded corners and rounded flap; watercolor and gold leaf on white silk with pleated light blue silk trim; flap decorated with the all-seeing eye; underneath the flap is inscribed "John Mc Farlane / present from his Dauther [sic] / Mary King 1836"; center is painted with twin pillars, an arch with keystone supported by double pillars on a mosaic pavement, which is approached by five steps; under the arch is an altar bearing a Masonic square and compasses, on top of which rests an open Bible with square and compasses; an ink well with quill pen, and crossed keys, three candles are placed on the steps; at each side of the double pillars are symbols which include clasped hands, sword in heart, ladder, scythe, and hourglass; beyond the large twin pillars are, at right, symbols of Jacob's Ladder, seven branch candelabra, beehive, square, level, rule, plumb, and triangle; at left an altar with incense, urn, dove and ark, anchor of hope, and pick, spade and trowel; handwritten card is glued to the bottom reading "John Mc Farlane / Present from his Daughter / Mary King 1836"; reverse is lined with natural linen.

Though a handwritten note attached to this apron suggests it was made by a relative of the owner, research has not supported this story. However, like other aprons in this exhibition, this one may have been made by a young woman, who received an academy education. During the late 1700s and early 1800s, refined sewing and elegant painting, in the style seen on this apron, were regarded as valuable female accomplishments. “The Badge of a Freemason: Masonic Aprons from the Collection,” March 2016-March 2017 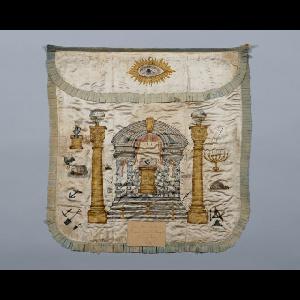 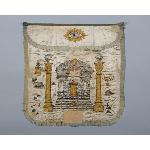 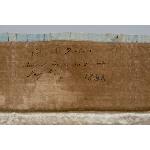 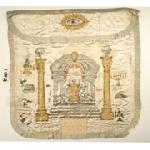 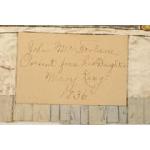 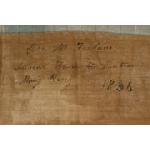