Silver Royal Arch Mark medal with a loop at top center. The loop is attached to a leafy sprig at top of an openwork circle. Letters along the circle's border read "HTWSSTKS." In the center is a five-point star with "G" in the middle. In between the arms of the star are leaves or feathers. Engraved on the back of the star is a beehive. Engraved on the back of the circle border is "Edward Asa Raymond Boston."

Edward Asa Raymond (1792-1864) owned this mark medal. As part of the Mark Master Mason degree ritual, the initiate, acting as a stonemason helping to build King Solomon’s Temple, chose a unique mark to distinguish his work from that of other masons. Raymond selected the symbol of a beehive, symbolizing hard work and industry, and had it engraved on the back of this medal. For further information, see Newell, Aimee, et.al., "Curiosities of the Craft: Treasures from the Grand Lodge of Massachusetts Collection", 2013, p. 112-113. 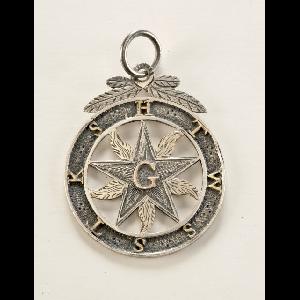 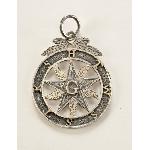