Masonic Master Mason apron with rounded body and rounded flap. White leather with cream lining. Flap painted with an all-seeing eye and clouds. Body painted with columns at center at top of three steps, mosaic pavement in between, with altar with open book and three candlestands. Above the altar is a square and compasses symbol with G, sword and heart to one side, curved sword and book to other side. At left are a sun, ark and ladder. At right are a moon and seven stars, beehive, circle between two lines with book. At center bottom is a coffin. Handwritten in ink on back "Captured at the / battle of Logan's Field, KY. / Jan. 19, 1862, by / M.D. Manson / Comdg 2d Brigade."

This apron has a colorful history. An inscription states that it was “Captured at the battle of Logan’s Field, K.Y. Jan 19, 1862….” Union soldiers who were Freemasons found Masonic charters and aprons during the war and brought many of them home as souvenirs. This apron remained in the family of General Mahlon D. Manson (1820-1895), who took it from the Kentucky battlefield. Three generations of Freemasons in his family wore it before it was donated to the Museum. “The Badge of a Freemason: Masonic Aprons from the Collection,” March 2016-March 2017 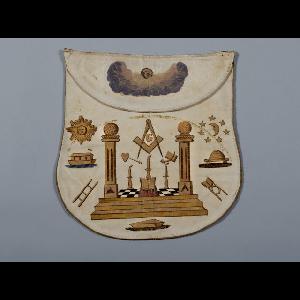 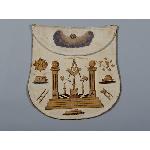 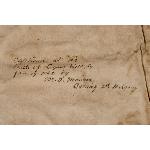