Masonic emblematic painting that combines symbols of Blue Lodge Masonry, Royal Arch and Knights Templar. The Royal Arch, supported by two columns on a mosaic pavement, is inscribed, "NZ. ABG. VN. ZNA. NAG. N. OEBGURE." Within a triangle or delta at center, surrounded by twelve candles, or "lights," a book lies open to verses numbered 72 and 73, which are legible as "Stand therefore having your loins girded with Truth And having only a Brest plate of Rightiousness" and "And this pray that your Love may abound yet more and more in Knowledge and in all Judgement." A robed figure kneels before a cubical stone with pyramidal apex, the several facets inscribed "RYBVZ." A square plate at left represents the "Breastplate of Judgement" bears initials of the twelve tribes of Israel. At right are a sword and a trumpet, with other symbols. Across the top, a sun and moon flank an all-seeing eye. At left, outside the columns, is a coffin; at right, a square and compasses symbol.

The letters "U" and "T" in the center of the breastplate represent the Urim and Thummim, or light and truth inherent in the concept of the Breastplate of Judgement. The Breastplate of Judgement was worn by the High Priest in American Royal Arch Chapters as a vestment, symbolic of his responsibility to the laws and ordnances of Royal Arch Masonry. The plate was set with twelve colored stones, each representing one of the twelve tribes of Israel which were named after the sons of Jacob. The cubical stone with pyramidal apex, or broached thurnal, which was often depicted on French Entered Apprentice tracing boards, was replaced in American rites by the perfect ashlar. The cryptic letter groups inscribed on the arch and thurnal were encoded in "Caesar's Cipher," a simple regular advance substitution cipher attributed to Julius Caesar (100-44 B.C.). The code groups decipher as "Am not I a man and a Brother" and "Elo[h]im" (one of the Hebrew names of God). 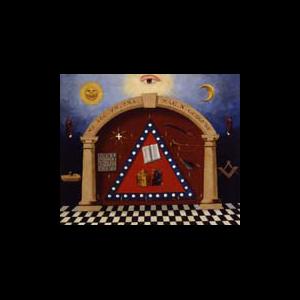