Templars of Honor and Temperance Membership Badge or Jewel with Case. a: Silver jewel with purple silk ribbon behind, and suspended medallion. Top portion of jewel, backed by ribbon, is of cut and engraved sheet silver. It is in the shape of an altar with engraved Bible on it, and has a pin back; below this, the shape of a columned temple with a triangle at center of the columns; the roof of the temple has been engraved with "T of H" on top; checkerboard pavement and steps at bottom. A round medallion hangs from a silver bar decorated with engraved scrollwork at the bottom of the ribbon; cast silver medallion reads "TSRTDCTA" with triangle and bow and arrows at center; a horse's head is engraved at the center of the triangle; "C. F. Adams" is engraved below the bottom edge of the triangle. b: Black leather-covered case with silver-colored metal clasp and gold-colored metal hinges; interior has purple satin lining (likely silk) inside lid, and purple velvet with a purple satin tab for holding jewel on the other side (likely silk).

In 1846, members of the Sons of Temperance formally established a new, but related group, the Templars of Honor and Temperance in New York City. Members of this group, like the Sons of Temperance, swore an oath “…of abstinence and fraternity.” They also declared, “our enemy is alcohol; our war one of extermination.” The Templars of Honor developed, in part, because some members of the Sons of Temperance, founded in 1842, desired a more secret and elaborate ritual for their ceremonies. Initially the Templars of Honor's ritual included three degrees: Love, Purity and Fidelity. In 1851, members adopted three more degrees: Tried, Approved and Select Templar. In developing all their degrees, the Templars of Honor drew on Masonic and other fraternal rituals for inspiration. As well, their regalia included aprons and collars and they employed some of the same symbols that as were used in Freemasonry. Intriguingly, as in the case of the Mark Degree, part of Royal Arch Freemasonry, the Templars of Honor asked members to select a personal, meaningful emblem. These emblems were engraved onto membership badges that bore symbols related to the group in relief, along with the Templar of Honor’s name. These round, coin-like badges, because they featured a personal symbol, resemble Masonic mark medals and illustrate another way that the Templars of Honor used Masonic degrees as models for their work. On this one, an engraver incised the name of an unknown member, C. F. Adams, and his symbol, a horse’s head, within an equilateral triangle. His badge hangs from a larger badge made from purple ribbon and silver cut and engraved to resemble an altar with steps above a temple. It also bears symbols related to the group, such as the emblem of the organization, the nine-pointed Star of Fulfillment enclosed within a triangle, at the center. Letters on the columns holding up the temple's domed roof refer to virtues valued by the Templars of Honor: truth, love, purity, and fidelity. The other side of the round membership badge, pictured below, is not personalized. It bears different symbols important to the group--a lamp, a serpent biting its tail, an altar, and others--in relief. The Templars made the round signets out of white metal and with silver and gold finishes. The 1877 Manual of the Templars of Honor and Temperance featured illustrations and a description of the group’s membership badge. The author noted how members should use this badge, advising them to “Bear this Signet and Symbol with you. Wear it next to your heart.... Study well its lines, and angles…figures, and letters, and mystic characters. It will speak to your heart, and its lessons and talismanic power will, if occasion should require…revive your drooping spirit.” For more information, see Tabbert, Mark A., "American Freemasons: Three Centuries of Building Communities", 2005, p. 74, and blog post, July 23, 2019, https://nationalheritagemuseum.typepad.com/library_and_archives/2019/07/templars-of-honor-membership-badge.html 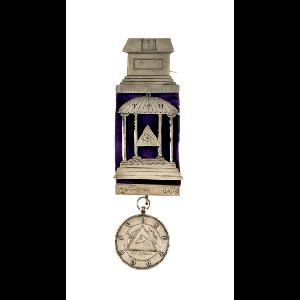 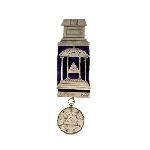 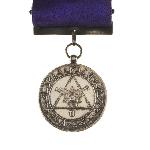