Sepia-tone stereocard photograph of a city street. Title shown at bottom of right image and reads "34. Lower Broadway, New York." Mounted on tan card. Double image of street view of Lower Broadway in New York City. A tall spire can be seen on the left. The building in the foreground has the name "Aldrich" written in large letters on the side. Pedestrians can be seen on the street below. Stamped in blue on the ends of the card "American Cities. / New Series." and "T. W. Ingersoll, / Publisher, / 56 East Sixth Street, / St. Paul, Minn." The back of the card is blank. 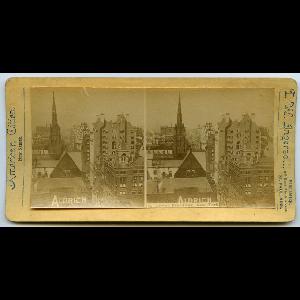