Color stereocard illustrations of performers on a stage. Title is shown on bottom of both images and reads "Robert le diable 3me Acte Scene VII". Mounted on yellow card. Double image of performers on a stage. A man costumed in a tunic with a red cloak is surrounded by a large group of people in all white. A shrouded figure lays inclined on a slab. Stamped in black on both ends of the card "Les Theatres de Paris". The back of the card contains a small paragraph in French describing the copyright. 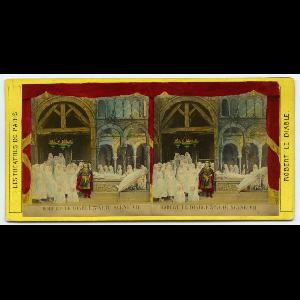 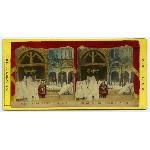