Sepia-tone stereocard photograph of an actor figurines onstage for the opera "L'Africaine". The title is shown on the bottom of both images and reads "L'Africaine 2me Acte Scene II." Mounted on a yellow embossed card. Double image of an actress standing center stage with her hand up facing an actor weilding a knife. A second actor lays in a bed to the left behind the actress. Embossed on the bottom of the card is "Les Theatres de Paris". Etched on the left side of the card are the letters DB above a five-pointed star. Embossed on each edge of the card is the word "depose". In each corner of the card, starting from the top left and going clockwise, are the embossed letters B, D, H, and L. An embossed theatrical mask is at the top center of the card. A blue stamp on the back of the card written in French discusses the copyright of the image. 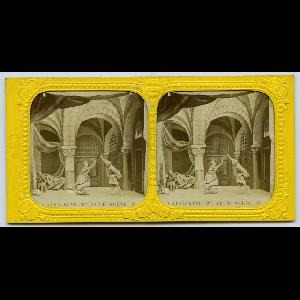 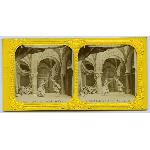 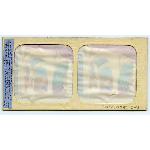