Sepia-tone stereocard image of human models on a stage. Title is shown at bottom of both images and reads "L'Africaine 5me Acte Scene I". Mounted on yellow embossed card. Double image of actors on stage for the opera "L'Africaine". Two woman stand in the foreground, one in a European style gown and one in an elaborate headress. Five male actors dressed as native guards stand in the background. The stage is decorated with a jungle background. Embossed on the bottom of the card is "Les Theatres de Paris". Etched on the left side of the card are the letters DB above a five-pointed star. Embossed on both edges is the word "Depose". In each corner of the card, starting from the top left and going clockwise, are the embossed letters B, D, H, and L. An embossed theatrical mask is at the top center of the card. A blue stamp on the back of the card written in French outlines the copyright of the image. 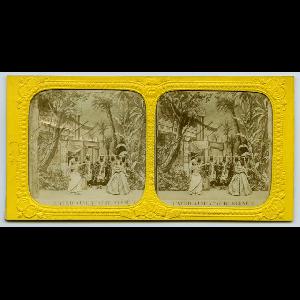