Sepia-tone stereocard photograph of the Old State House in Boston MA. Title is visible at the bottom of the right hand image and reads "654. "Old State House" Boston." Mounted on tan card. Double image of the front facade of the Old State House in Boston. Advertisement posters can be seen on the front of the building. Pedestrians walk by on the street. A tall building can be seen in the background. Stamped in blue on the edges of the card "American Cities. / New Series." and T. W. Ingersoll, / Publisher, / 56 East Sixth Street, / St. Paul, Minn." The back of the card is blank. 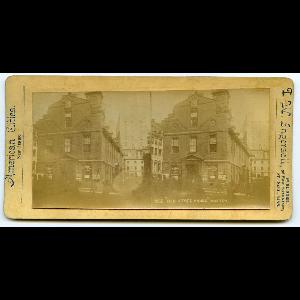