Life of George Washington--The farmer colored lithograph; scene of Washington in field with workers making bales of hay; two children playing, lower left; Washington speaking to overseer, right; Mount Vernon in background; colored in blue, yellow, green, brown and black; bottom reads "Painted by Stearns / Entered According to Act of Congress in the year 1853 by M. Knoedler and Co. in the District Court of the Southern District of New York / Lith by Regnier, Imp. Lemercier, Paris / Life of George Wasington/ The Farmer / ...having effected the great object for which he was placed at the head of our armies, we have seen him convert the sword into the ploughshare and sink the soldier in the citizen/ (Speech of John Marshall before Congress)'; with impressed mark of "Goupil and Co/ Editeurs/ Paris". 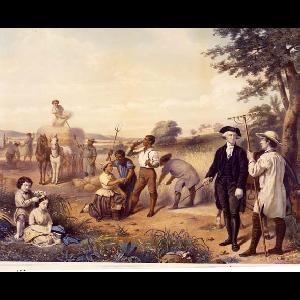