Independent Order of Odd Fellows Quilt; 25 block red and green appliquéd Baltimore-style album quilt; in the lower row, a block contains Odd Fellows symbols (including the three-link chain, an hourglass and heart in hand), with pieced lettering "F.L.T. / I.O.O.F."; rainbow star in the center block; on the left a block contains an American eagle, flag, and Liberty cap; other blocks consist of arrangements of various fruits and flowers; four blocks consist of flower basket patterns; blocks are bordered by a red and green meandering vine. Appliquéd and pieced by hand. Blocks are 17" square. Hand-quilted with eight to ten stitches per inch. Single border with appliquéd vine. Back to front binding; thin cotton batting. Muslin backing in multiple pieces.

In the nineteenth century, men and women remembered friends and experiences by collecting signatures, poems and sketches in small books called albums. Around the same time, quilts featuring a different image or pattern in each block, many of them signed, became popular. Like the album books, these so-called album quilts were collections of symbols or images that held meaning for those who made them. Family history relates that two sisters who married two brothers made this quilt for their nephew. These particularly adept seamstresses composed blocks that reflected their taste and represented organizations, events, and ideals they valued. Along with an eagle, representing the United States, the makers included symbols such as the letters FLT (standing for friendship, love, and truth) and the all-seeing eye that were associated with the Independent Order of Odd Fellows, an organization that grew enormously in 1840s Baltimore. Ann's husband, Reuben, belonged to the Odd Fellows Franklin Lodge. 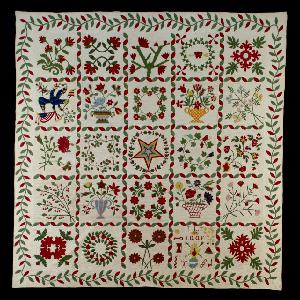 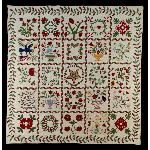 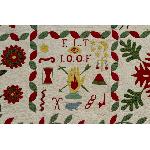 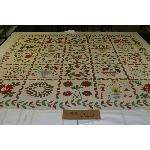 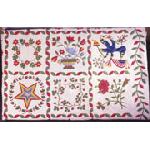