White silk Masonic Master Mason apron with triangular flap and square body with rounded corners. Flap is trimmed with silver and sequin decoration and pleated light blue silk ribbon. Body is printed in black with a central design of a rock in the middle of the ocean with waves crashing around it. On the rock are three candlestands and an altar with square and compasses. Lightning comes from sky at left. At left in the background is an ark or a building. There is a printed border on three sides of the central design. At each side is a column with grapevines twisted around. At the center of one column are figures of faith, hope and charity. At center on the other column is time and the virgin. Along the bottom border are oak leaves, acacia and wheat. The body of the apron is trimmed in the same way as the flap - silver trim with light blue pleated silk ribbon. The flap and body are both lined with blue silk. The top edge is bound with light blue silk. The apron was originally hand-stitched, but the binding on the top edge has been reinforced with machine stitching (probably a later replacement).

A manufacturer designed this apron in the square shape with a triangular flap that became the favored shape for Masonic aprons by the late 1800s. While this apron may pre-date the Civil War, the silver tape on this apron was commonly used to trim uniforms in the mid- 1800s. The dramatic central image on the apron of an altar and candlesticks on a rock jutting out of a turbulent sea relates to the Master Mason degree. “The Badge of a Freemason: Masonic Aprons from the Collection,” March 2016-March 2017 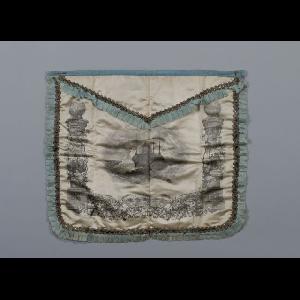