Grand United Order of Odd Fellows apron. Rectangular body with rounded bottom corners and no flap. White silk with red pleated silk trim and gold bullion tape along the edges. Painted on the body at top is a rainbow with initials "G.U.O. of O.F." above an all-seeing eye. At center is a shield shape with a water scene in the setting sun. A building or ark is to the left. Above this is an hourglass and scythe at left and a skull and crossbones at right. At top center is the figure of charity - a woman with two children in her lap. Below the scene is a heart and hand symbol, a lamb, a lion, and a pair of clasped hands. At bottom is a white banner reading "Amicitia Amor et Veritas." At each side is an allegorical female figure: at left is Justice, holding scales, and at right, Prudence, holding a mirror and a torch; both figures stand on a globe. Attached along the top is a red cord that extends to form ties and ends in tassels. Off-white linen backing. Stamped in blue on back is an oval with the lettering "Manufactured at / Mrs. D.B. Bowser's / Odd Fellows & Masonic / Depot. / 481 North Fourth St. Philadelphia."

Regalia maker Elizabeth Harriet Stevens Bowser (1831-1908) stamped this Grand United Order of Odd Fellows apron with her mark. The G.U.O.O.F., which traces its roots to Freemasonry, is an African American fraternal organization. This apron features the group’s motto, Amicitia Amor et Veritas (Friendship, Love, and Truth), as well as female figures representing Justice (holding scales), Charity (with children), and Prudence (lifting a mirror and a torch). Bowser was married to David Bustill Bowser (ca. 1820-1900), a Philadelphia regalia maker, abolitionist, and artist who served as Grand Master and Grand Secretary of the Grand United Order of Odd Fellows in the 1860s through 1880s. 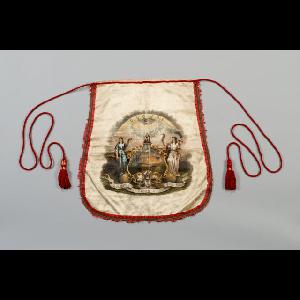 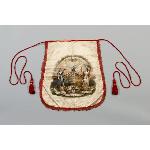 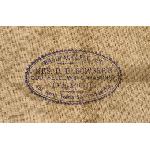 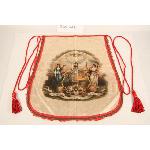