Sepia-toned Masonic carte-de-visite photograph. Portrait of seven unidentified men lined up in two rows. Five men are sitting in the front row, with two men standing directly behind them in the second row. All men are wearing dark coats and Masonic sashes. Additionally, all five men in the front row have dark pants and white Masonic aprons. The man on the far left of the first row has a beard, a mustache, and a jewel with crossed keys. The next man immediately to his right also has a beard and mustache, plus a white shirt, black bow tie, and a square and compasses jewel. The man in the middle of the third row has a white shirt, black bow tie, beard and mustache, and an unidentifiable jewel. In his left hand, he is holding a pen and a ruler. The second man from the right has a square in his right hand, and is wearing a square jewel, along with a black shirt. He also has a beard and a mustache. The man on the far right end of the first row is holding a plumb in his right hand. He is wearing a plumb jewel, along with a white shirt and a beard. In the back row, both men have white shirts and black neckties. The man in the back row, on the right, has a dark patterned coat and vest, along with a plumb jewel. Printed in black on the back is "McGhie, / photographer, / Hamilton." Handwritten on the back is "John McGhie 2nd from / left. front Row. / Masonic Group. / Hamilton, Scotland." 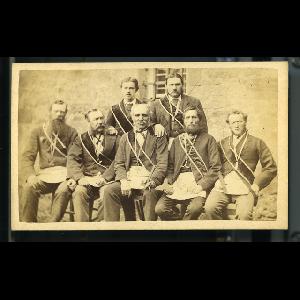 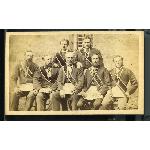 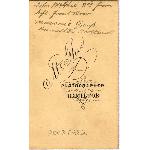