Sepia-toned Masonic carte-de-visite photograph from a print or painting. Full length portrait of a man, identifiable as George Washington, wearing black coat, breeches and stockings, black buckled shoes, white frilled shirt, and Masonic apron and collar. Collar is predominately white, with a leafy design, and a master's square jewel hanging from the point. Apron is white, with a flap and fringe. The apron has an emblem with two columns connected by an arch, as well as several other Masonic symbols. Behind Washington is an arched doorway; in the foreground are two column pedestals. He is depicted with his hands held up and outward to the viewer. Printed in black on the back is "J. Ward & Son. / Publishers, / 125 Washington Street / Boston / Mass." Printed on the back in pencil is "1068." 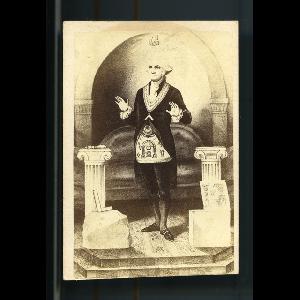 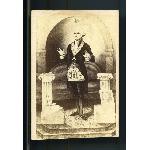 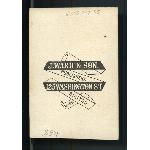