Sepia-toned Masonic Knights Templar carte-de-visite photograph. Full length portrait of two men with mustaches and beards sitting with their legs crossed in chairs next to each other. The man on the left side of the photograph is wearing a black frock coat, black pants, black shoes, a white shirt, and Knights Templar gauntlets, apron, and sash or baldric. Both his apron and sash are black, with a white border. The apron has crossed swords on the flap, and a skull and crossbones on the body. His sash has both a Maltese cross and a nine-pointed star. His gauntlets are white. He has a sword in his lap, and his chapeau-de-bras is tucked under his right arm. His chapeau-de-bras is black, with a ruffled rosette, and black and white feathers. His left arm in resting on the arm of the chair. The man in the right side of the photograph is wearing a black frock coat, black pants and shoes, collared shirt and tie, and Knights Templar apron, belt, sash or baldric, and gauntlets. His apron and sash are both black, with white edging, just like those of the other man in the photograph. His sash has a Maltese cross and a nine-pointed star, while his apron has crossed swords on the flap. He has an epaulette on the left shoulder of his frock coat, and a jewel with a square and compasses symbol in a triangle on the left side of his coat. His gauntlets are white, and there is a cross visible on the left one. He is holding a sword in his left hand, and his chapeau-de-bras under his right arm. The chapeau-de-bras is black, with an unidentifiable badge on the side, and black and white feathers on top. His right arm is resting on the arm of his chair. Both chairs have fringes on the arms and the seat cushions. The front of the CDV has a single gilt line border. Printed on the back in red is "Moore Brothers." Also printed in red on the back, in a rectangular frame, is the text (clockwise, from the bottom edge) "Established 1857 / Photographic Gallery and Studio / Duplicates Furnished / Opposite Court Square, Springfield, Mass." 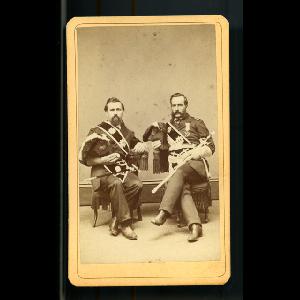 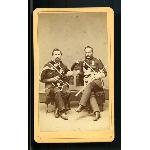 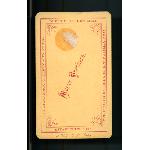