Sepia-toned, hand colored Masonic Knights Templar carte-de-visite photograph. Bust portrait of a man with mustache and beard wearing a dark frock coat and Knights Templar gauntlets, belt, sash or baldric, and plumed chapeau-de-bras. His frock coat is double-breasted, with buttons and epaulets hand colored in red, silver-like gray, and golden brown ink. He has three jewels pinned to his frock coat: a Grand Commander's square with a red ribbon; a bell-shaped jewel with a red ribbon; and a Maltese cross with a white ribbon. The metal parts of the jewels are colored in red, gray, and brown. His gauntlets are white, with red Maltese crosses on the cuffs. His sash is white, with a black and gold border and a nine-pointed star with a cross. The star is colored in red, gray, and brown. His belt is red, with gold edging, and a gold buckle with a red Maltese cross. His chapeau-de-bras is black, with black and white feathers and a red Maltese cross on the side. Under his left arm, he holds a sword. The hilt of the sword is white, with a red cross. The blade of the sword is hand-tinted in red, gray, and brown. The photograph is bordered by a single red line. Handwritten on the back in black ink is "Geo. S. Anderson / G. C. / of K.T. of Ga." Printed in red on the back is "Smith and Motes / No. 27 / White Hall Street, / Atlanta, Ga." 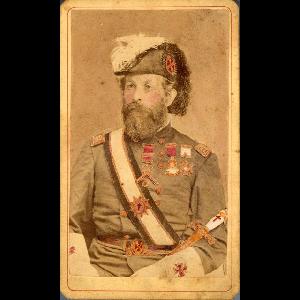 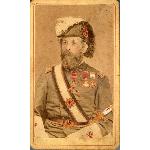 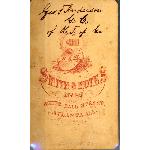