Black and white Masonic Knights Templar carte-de-visite photograph. Full length portrait of a bearded man standing and wearing a black frock coat and pants, black shoes, and Knights Templar gauntlets, apron, sash or baldric, and belt. His gauntlets are white. His belt is black, with a rectangular buckle. His apron and sash are both black, with white edging. The sash has a nine pointed star, while the apron has crossed swords on the flap and a skull and crossbones on the body. The man has a jewel with a square and compasses symbol on his frock coat. He has a sword in his right hand, and another in his belt on his left side; both swords are pointed downward. He is holding his chapeau-de-bras in his left hand, while he rests his left arm on a chair. The chapeau-de-bras is black, with black and white feathers on top. The chair is ornately carved, with a curved back. Both the seat and the back of the chair are padded and covered with floral-patterned fabric. There is a gilt, double-lined border around the photograph, which has been trimmed off along the top edge. Printed in black on the back is "Moore Bro's / Photographic Gallery, / Cor. Main & Pynchon Sts. / Springfield, Mass. / Additional Copies from the plate from which / this picture is taken, can be had if desired." Handwritten in pencil on the back is a crude round figure and the word "MASON." 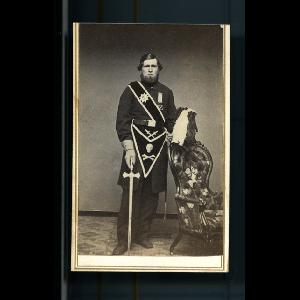 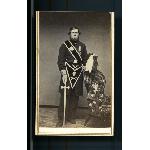 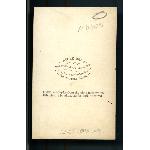