Black and white Masonic Knights Templar carte-de-visite photograph. Full length portrait of a bearded man wearing a black frock coat and pants, brown shoes, white shirt, black belt, and Knights Templar chapeau-de-bras, sash or baldric, apron, and gauntlets. His chapeau-de-bras is black, with a black feather on top. His sash is black, with a white border, a Maltese cross, and a nine-pointed star. His apron is triangular in shape. It is black with a white border; there is a Maltese cross on the flap, and a triangle symbol on the body. His gauntlets are white; the gauntlet on his left hand has a black cross on the cuff. The man has one sword hanging from the left hand side of his belt, and another in his right hand. Both swords point downward. Additionally, he has a dagger-like jewel or medallion pinned near the bottom hem of his frock coat. There is a gilt, double- lined border running around the photograph. The CDV is truncated at each of the four corners, and trimmed irregularly along the bottom edge. Handwritten in pencil in the back is "No 3." Printed in black on the back is "Kimball, / State Block, / Corner of Main and School Sts., / Concord, N. H." 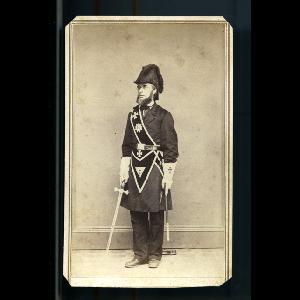 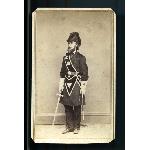 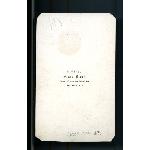