Sepia-toned Masonic Knights Templar carte-de-visite photograph. Full length portrait of two men standing, one in Knights Templar uniform. The Knights Templar member is to the right of the other man (on the left side of the photograph). He is wearing a beard, a dark frock coat and pants, dark shoes, white shirt, necktie, and Knights Templar apron, sash or baldric, and gauntlets. His apron is rectangular and light in color; it has a white triangle on the flap. Below the flap, there is a white cross, with a smaller Maltese cross inscribed inside. His sash is gray, with an circular emblem in the center. His gauntlets are white on the hands, with somewhat darker cuffs. There is a Maltese cross on each cuff. Additionally, he has two jewels on the left side of his frock coat - one of a seven-pointed star, and one of a Maltese cross. This man is holding a book in his right hand. The man to his left is wearing a light coat and pant, a white shirt, and darker shoes. His right arm is around the back of the Knights Templar member. There is a brown, double-lined border around the edge of the CDV. The word "Masonic" is handwritten in pencil on the back, along with a letter "A" and a numeral "3." Printed in black on the back is " S.W. Gault, / Photographer, / Hamilton, / Bermuda." 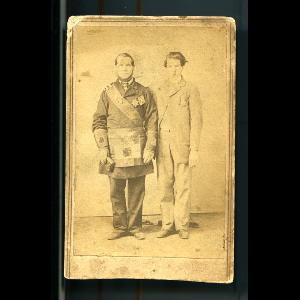 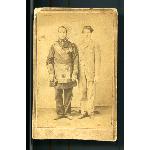 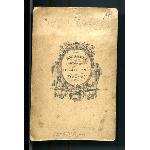