Colored lithograph titled "The Soldier's Grave." Scene of weeping widow leaning on tombstone; stone reads "Sacred / to / the Memory of / ------ / who died in Defence / of His / Country / How sleep the brave / Who sink to rest / With all their Country's Wishes blest"; child sleeping near woman; figures of old man and woman at gate in background; on tombstone in background "27 Dec 1862 D. Byer"; on tree "THIS --862"; printed on bottom (now obscured by black ink) "Published by Caldwell and Co 37 Park Row N.Y. / Entered according to Act of Congress in the year 1862 by Caldwell and Co. in the Clerk's office of the District Court of the United States for the Southern District of New York / Lith. by Thomas and Eno, 37 Park Ave. N.Y."

By the end of 1862, the number of Union soldiers killed in the Civil War approached 100,000. Some of these soldiers’ remains did not come home. The army buried them in cemeteries near the battlefields where they fell. To remember the dead, some families created their own memorials by filling in a soldier’s name on a commercially produced print like this one. 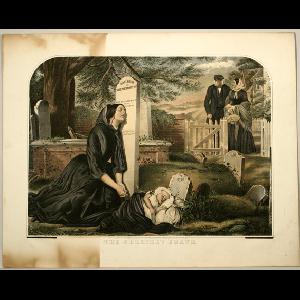