J. Wightman Civil War Store token. The token is round and shows a profile bust of a Native American [Indian] wearing a feathered headdress on the front face of an 1863 United States penny. On the reverse written in relief is 5 lines of text, "J. WIGHTMAN / 188 / WASHINGTON / ST. / NEWARK, N.J."

By 1862, the second year of the Civil War, government-issued coinage began vanishing from circulation. American citizens hoarded all coins with gold and silver, and eventually began hoarding copper-nickel cents as well. This made it extremely difficult for businesses to conduct transactions. In response, many merchants turned to private minters to fill the void left by the hoarded coins. The first of these privately minted tokens appeared in the autumn of 1862, in Cincinnati, Ohio. It is estimated that by 1864, there were millions of Civil War tokens (nearly all redeemable for one cent) in circulation, consisting of approximately 10,000 varieties. 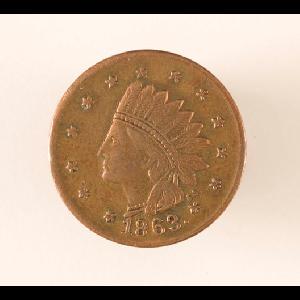 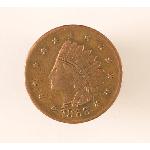 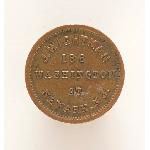