Masonic chart for the first three degrees. Each horizontal section presents symbols central to each of the first three degrees - Entered Apprentice, Fellow Craft and Master Mason. Includes a variety of Masonic symbols, such as the all-seeing eye, Solomon's Temple, altar, Bible, candlesticks, rainbow, sun, moon, stars, stairs, columns, globes, and George Washington as a Mason, among others. Along the bottom is printed, "J. H. Bufford's Sons Lith Boston / Entered According to Act of Congress in the year 1866 by James T. Hill in the Clerk's Office of the District Court of the District of Massachusetts."

This chart's three sections present symbols central to each of the first three Masonic degrees - Entered Apprentice, Fellow Craft and Master Mason. Freemasonry uses the story of the building of King Solomon's Temple to teach moral lessons to its members. Each of the tools and structures seen here has a symbolic meaning. For example. each step of the winding staircase in the middle section represents an officer of the lodge, an order in classical architecture (Doric, Ionic and Corinthian), or one of the liberal arts and sciences. J.H. Bufford, the lithographer, was born in 1810 in Portsmouth, New Hampshire. He became an apprentice at Pendleton's Lithography in Boston. In 1835, Bufford went to New York, where he worked for George Endicott and Nathaniel Currier. In 1840, he returned to Boston and became a partner at B.W. Thayer and Company. In 1845, he took over the shop that had been Pendleton, Moore and Thayer, and named it J.H. Bufford and Company. In 1865, his sons, Frank and John Jr., became partners in the firm J.H. Bufford and Sons. J.H. Bufford died in 1870 having been the principal lithographic printer in Boston from 1845 to 1870. Printers make chromolithographs, like this Masonic chart, using many different smooth, lithographic stones, each carrying a different ink color. This printing method resulted in colorful prints, quickly produced, with each print in an edition as bright as the first. Printers like J. H. Bufford’s Sons, who issued this work, published large editions of prints in the mid-1800s. Their products were sold all over the country. Exhibited in “The Badge of a Freemason: Masonic Aprons from the Collection,” March 2016-March 2017 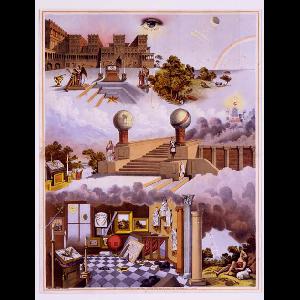 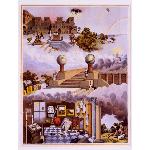 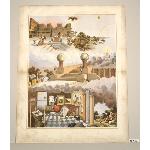