Tall back wooden Master's chair (throne) with square and compasses and "G" behind head. The chair has multiple Masonic symbols painted on the back, the arms and the front of the seat, including five-point stars, candelabra, sabres, an apron with all-seeing eye on the flap and a cabletow. The sides of the chair's back form columns with globes on top. There are also painted symbols for lodge officers, a square, level and plumb; a slipper representing the Entered Apprentice degree; and chisels, crossed mallets and an archway with keystone for the Royal Arch Mark Master degree. Inscription on stretcher reads, "Manufact'd by John Luker." Left support is inscribed, "JHM Houston's." The "legs" are X-shaped supports known as "Grecian" or "curule" bases. Some of the paint has metallic powder or glass mixed in.

This chair is marked by its maker, John Luker (b. 1838); it is also inscribed "JHM Houston's." Records tell us that Houston was Master of Swan Lodge No. 358 in New Mount Pleasant, Vinton County, Ohio, from 1867 to 1873. The lodge was relatively new when the chair was made, having been chartered in 1866. In 1871, a lodge building was dedicated, so the chair may have been made for the new space. Records about maker John Luker's life are sparse. His Masonic membership is unclear, although a Joseph Luker was initiated into Swan Lodge in 1870. That same year, John Luker is listed on the U.S. Census as living in Washington Township, part of Ohio's Hocking County, and north of Vinton County, where the chair was used. At the same time, Joseph Luker, 21 years old and presumably John's younger brother, was living in the same house. Joseph's job is listed as "metallic roofing business," suggesting a supplier for the metallic powders that John used when painting the chair. 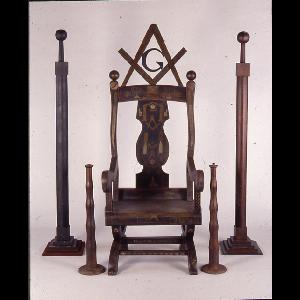 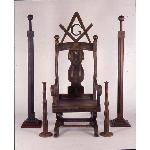 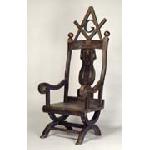 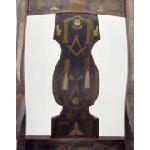 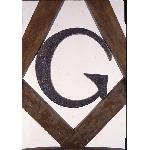 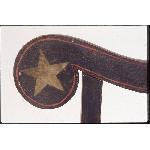 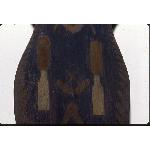