Masonic Order of the Eastern Star Quilt; white background with Masonic designs of square and compasses and "G" in red on four corners; central design of Eastern Star symbol (five-point star) in orange, purple, red, blue, yellow; two borders of red and blue on edges with red binding; hand-quilted at ten stitches per inch in a number of diamond and feather designs. Pieced and appliqued by hand; assembled by machine. Five full blocks on point; four half blocks; four quarter blocks; they vary in size from 17 to 24 inches. Four borders; thin cotton batting. Backing is an off-white cotton fabric.

In her bold design, the unnamed maker of this quilt adapted the Masonic emblem of a square, compass, and the letter G, as well as the colored five-pointed star that serves as a symbol of the Order of the Eastern Star, a women's auxiliary of Freemasonry. Although she featured emblems of established groups, her interpretation was highly individual. Her compass is an abstraction shaped out of squares, rather than a more standard version. The colors she chose for the points of the star deviated from the Eastern Star's official guidelines. Her construction technique also underscored her originality. Although most makers formed quilts out of square or rectangular blocks, this quiltmaker used diamond-shaped and triangular panels. 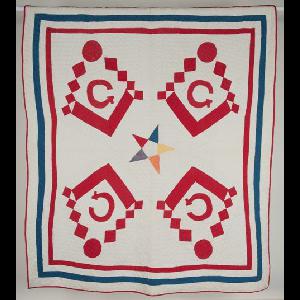 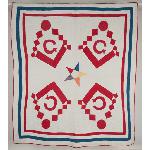 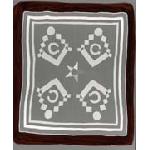 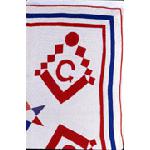