Black and white stereocard photograph of General Ulysses S. Grant's tomb - a white rectanular building with a rounded tower behind it and columns in the front. A person can be seen in the foreground of the image. The trim of the stereocard is a beige color. Beneath the second image is printed in black " Tomb of General Grant." The back is white and has pencil writing in the upper right hand corner - a circled four and "2 00." 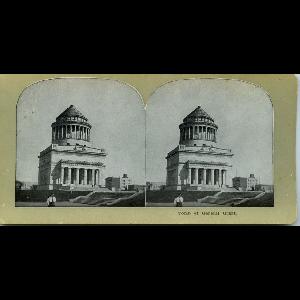