Silk political campaign ribbon for Benjamin Harrison (1833-1901) and Levi P. Morton (1824-1920) mounted in a brown wooden frame. The body of the ribbon has vertical red and white stripes. The top has a rectangular section surrounded on three sides with a blue border with white five-point stars (similar to the US flag). Printed in the center of the top section, in black, are two bust portraits of men. Both wear dark coats and white shirts. The man on the left wears a vest and a dark necktie. He has a white beard. The man on the right wears a patterned necktie and is cleanshaven. Black lettering below each man reads, "President Benjamin Harrison of Indiana" on the left and "Tor Vice President Levi P. Morton of New York."

The 1888 presidential campaign is marked by the vast number of political objects produced. Incumbent Democratic president Grover Cleveland (1837-1908) and his running mate, Allen G. Thurman (1813-1895) lost to Republicans Benjamin Harrison (1833-1901) and Levi P. Morton (1824-1920). Benjamin Harrison was the grandson of president William Henry Harrison (1773-1841) who was elected in 1840. Some of Harrison's campaign textiles use nostalgia from his grandfather's election, while others reminded voters of Harrison's Civil War service. The 1888 outcome was close, with Harrison winning the presidency by electoral vote despite losing the popular vote, similar to the 2000 race between Republican George W. Bush (b. 1946) and Democrat Al Gore (b. 1948). 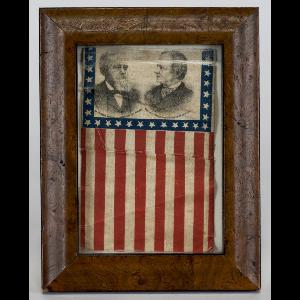