Red cotton political campaign handkerchief with black and white printed decoration. Sides are selvage; top and bottom are turned under and hemmed. Outer border of three thin white lines; decoration along the sides with white diamonds and squares. Each corner has a pair of crossed white flags. Printed in black on the flags on the right is "No Surplus" and "Low Taxes." Printed in black on the flags on the left is "Tariff Reform" and "For Revenue Only." At top center is a U.S. flag with crossed cannons and an eagle. Below the eagle are two oval portraits, each a bust view of a man. The man on the left has a mustache and wears a dark coat and tie, with a white shirt. The man on the right has a beard and wears a dark coat, vest and tie with a white shirt. A banner between the two images reads, "The / Union / For / Ever." A scroll at bottom between the two portraits has black lettering, "Public Office / A / Public Trust." There is a series of banners below each portrait. On the left, they read, "For President / Grover Cleveland / of / New York." On the right, they read, "For Vice President / Allen G. Thurman / of / Ohio."

The 1888 presidential campaign is marked by the vast number of political objects produced. Many of the items championing sitting president Grover Cleveland (1837-1908) include a rooster as the symbol of the Democratic party, or crossed brooms, signifying that the candidates would "sweep clean the stables of government." Cleveland and his running mate, Allen G. Thurman (1813-1895) lost to Republicans Benjamin Harrison (1833-1901) and Levi P. Morton (1824-1920). Cleveland was Mayor of Buffalo, New York in 1882 and Governor of New York from 1883 to 1884. He served two terms as President of the United States, from 1885 to 1889 and from 1893 to 1897, but lost the election between his two terms when running with Thurman. Thurman was a Senator for Ohio from 1869 to 1881. The portrait of Cleveland on this handkerchief is based on a print at the New York Historical Society and the portrait of Thurman is based on a photogravure by Baker of Columbus, Ohio, engraved by H.B. Hall's Sons in New York. The dotted block design along the sides was used by supporters of Cleveland and Thurman. It is derived from a handkerchief printed in August 1888 by J.M. Jones (patent No. 18,513), which was based on drawing books of the era. 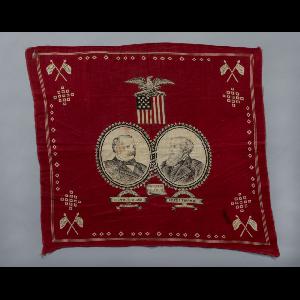