These members of Boston Commandery visited Mount Vernon in 1889, while they were attending the national Knights Templar Conclave (triennial meeting) in nearby Washington, DC. A Boston newspaper account of the trip notes that "the knights went to the portico of the famous old mansion and were photographed..." 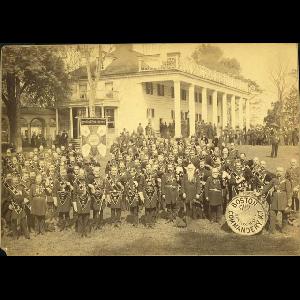