Round plate has a three-quarter view of George Washington at center. Washington wears a blue Masonic collar with a square jewel (for the Master). He also wears a Masonic apron over his black vest, coat and breeches and white ruffled shirt. At top center, above Washington, is an all-seeing eye symbol. Below Washington is an open Bible on a cushion with a gold square and compasses on top. The Bible is open to Psalm CXXXIII. Celestial and terrestrial globes on columns flank Washington. The background is completely filled with decoupaged cigar bands, primarily in red and gold, with some images of men. Some of the cigar labels include text, "Mi Bella," "E Nobel Kjobenhaun," Pour la Noblesse," and "Wm. E. Parsons & Co.," among others.

George Washington, an American hero and a much-admired Freemason, inspired different kinds of Masonic folk art. An artist decoupaged this glass plate with colorful paper cigar bands and cut-outs of Washington, transforming it into a portrait of George Washington as a Mason. Commonly called “cigar band art,” this type of collage was a popular home craft in the early 1900s. For further information, see blog post, February 20, 2018, https://nationalheritagemuseum.typepad.com/library_and_archives/2018/02/george-washington-masonic-folk-art.html 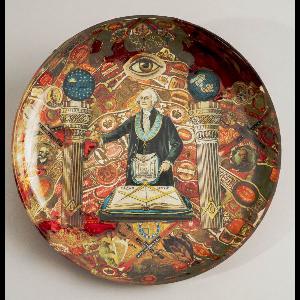